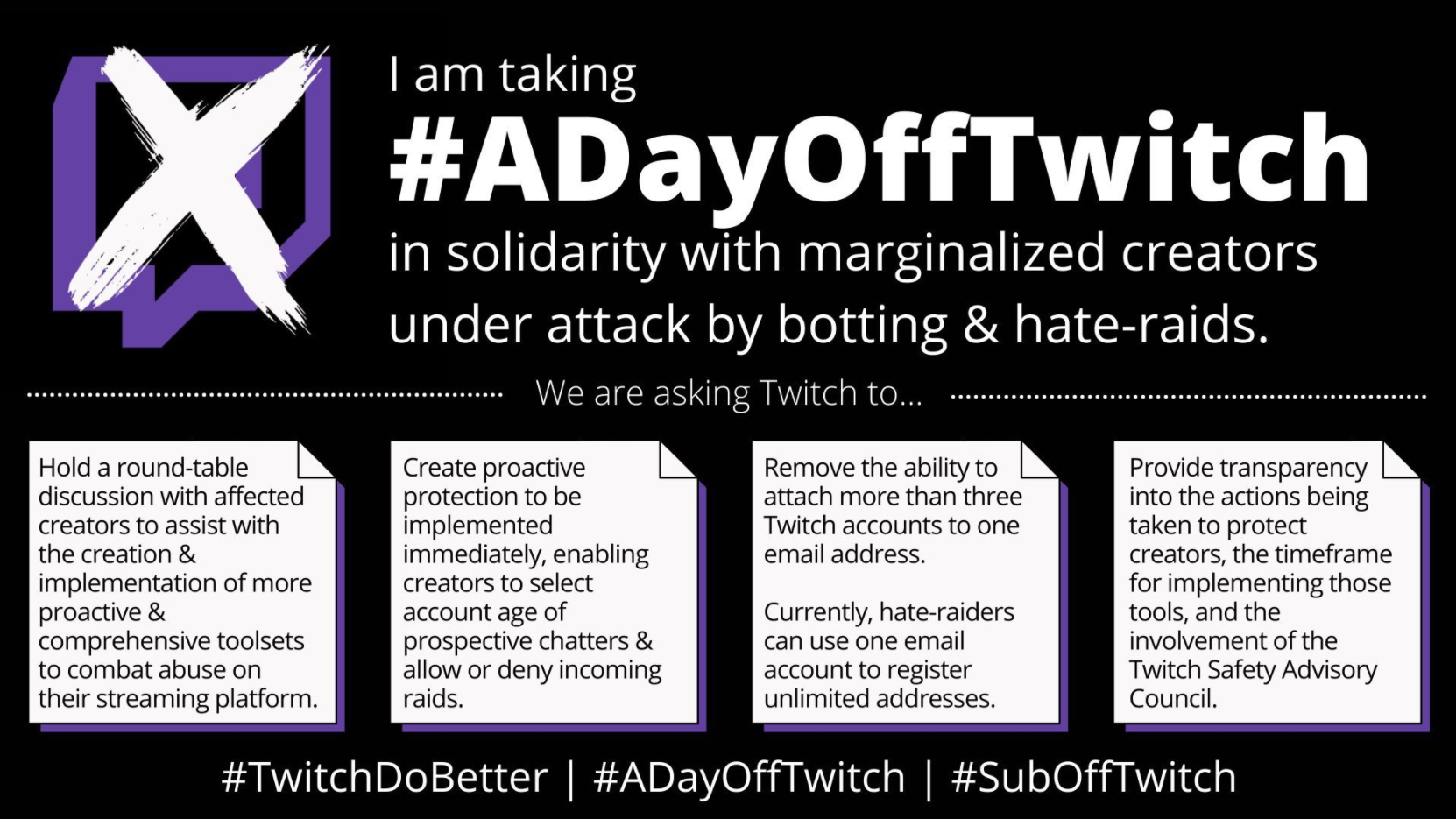 On September 1st, a number of Twitch streamers participated in #ADayOffTwitch, a blackout intended to bring attention to hate raids that have plagued the platform, specifically in lieu of hate raids targeting marginalized creators. Sadly, this isn’t anything new. The bots and dummy accounts flooding streamers’ chats with hateful messages has led to this growing movement that calls for Twitch to address its platform’s growing problem.

Three streamers, ShineyPen, Lucia Everblack, and RekitRaven, initiated the idea to organize the blackout of the platform, asking as many streamers as possible to stop streaming for one day. The trio had suffered for weeks prior to #ADayOffTwitch, attacked with racist and transphobic messages during their streams. Raven in particular has sadly become the “face” of hate raids because of her outspoken behaviour.

In August of this year, in lieu of the on-going platform-wide plague of hate raids, Twitch released a statement on Twitter: “You’re asking us to do better, and we know we need to do more to address these issues. That includes an open and ongoing dialogue about creator safety… We’re launching channel-level ban evasion detection and account verification improvements later this year. We’re working hard to launch these tools as soon as possible.”

A Need For Change

Twitch is arguably the largest platform for streaming, populated mostly by gamers who can interact with their followers in real time while playing a video game. Some notable users include popular gamers Ninja, Pokimane, and  celebrities such as Terry Crews, T-Pain, and even Rep. Alexandria Ocassio-Cortez.

But some users, such as the trio behind #ADayOffTwitch, said POC and LGBTQ+ streamers are often bombarded with harassment in their comments section during hate raids. With a platform as large and wide as Twitch, what steps can be taken to reduce, if not completely, get rid of hate raids?

RekitRaven stated in an interview with CNN that one way to end hate raids is to “give creators control of their spaces.” That means letting creators decide who can enter their chats based on when their accounts were created (many accounts participating in the hate raids are less than a day old and are created en masse specifically to participate in the r, Raven said).

Mixed Feelings and Responses to #ADayOffTwitch

#ADayOffTwitch has received varied responses, even from its supporters. For some smaller streamers, it may not be the best idea to participate in a blackout, even when affected by or at risk of hate raids. For some creators, Twitch is their main source of income and some are bound to contractual obligations crucial to the monetization of their content, including advertising deals or partnerships.

Some streamers (such as Detune) oppose the idea behind #ADayOfTwitch, as they believe these hate raids are designed to bully marginalized streamers off the platform, and taking a day off to “protest” is counterproductive. According to Detune, continuing to stream and speaking out against the abuse is the best way to raise awareness and bring attention to the problem of hate raids.

Hate Raid Response, created by JustMeEmilyP, features a list of chat commands and other resources and is being updated consistently as this situation continues to unfold. Here are a few tips from the website:

Bot accounts seem to be finding POC and LGBTQ+ streamers via tags that identify someone’s race, gender identity or sexuality. Therefore, not using these tags on your stream can lower the chances of a hate raid organiser finding your channel.

You can set your chat to stop strangers from typing immediately, which bots from hate raids usually are. Set your chat to follower-only, subscriber-only, slow chat down to allow time for moderating, require email verification to join chat, etc.

You can also choose who is able to raid your channel. The standard settings allow all raids, but you can change this to friends, followed channels, stream team members or you can ban all raids completely.

Set up a panic button

You can set up a panic button that triggers multiple commands in chat all at once. This would allow you to moderate your chat quickly during a live stream.

The specifics of setting up a panic button will depend on if you use a Stream Deck, Lioranboard, Kruiz Control or a stream management tool such as StreamElements or StreamLabs.

Femme Gaming stands with our POC and LGBTQ+ friends – We want to see change in the perception of non-white and non-cis creators who are often targeted by hate raids.  What actions can Twitch take to accommodate small and marginalized streamers? Let us know your thoughts!

How Video Games Can Improve Your Mental Health!